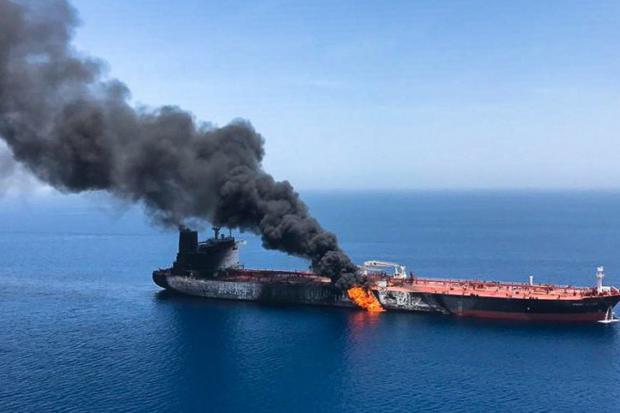 "You're gonna need a bigger boat"

Just when you thought it was safe to go back in the water someone poked a couple of holes in an oil tanker belonging to Iran.

This sent oil prices up briefly in the vain hope of stabilizing them.

But, strangely, Secretary of State Mike Pompeo was silent.

This was a warning to Iran from someone on the Saudi/Israeli/U.S. side, "You won't win without costs."

Well, of course, that's true. The big question everyone is asking is, of course, "Who did this?"

Details are sketchy with a lot of back and forth. Iran initially reported missile strikes.

But Iran's national tanker company, the owner of the boat, is now ruling out missiles.

But who did this is honestly not even relevant at this point. It could be Israel, the Saudis, rogue U.S. or British agents, etc.

Once we started down this path of sanctions, attacks on oil assets, and the like, it opened up the possibility of anyone with an axe to grind creating an incident for their purposes and blaming someone else for it.

There are so many conflicting priorities on all sides of this issue that all it takes is the right suitcase of money to start a war, or spike oil prices for a few hours, or whatever.

I can spin a dozen motivations out of my head right now whereby everyone involved has motive to attack an Iranian tanker. And they would all sound plausible, including the one that you know Mike Pompeo is just itching to waddle away from the buffet table to announce, that Iran attacked itself.

And the less that evangelical crazy-man says about this, the better everyone will be. In fact, it is Pompeo's silence is deafening, since he never misses an opportunity to bash Iran. It makes you wonder just how much he may or may not know about this.

The reality is that Occam's Razor is the most useful tool in this situation.

The people squawking the loudest about the President's recent policy decisions in the Middle East are the ones most likely behind this. They are the ones with the most to lose if Saudi Arabia falls and the U.S. pulls much of its force out of the Middle East.

The most likely candidate is the one actor who has consistently overstepped its bounds in attacking neighbors it considers hostile for any reason. Israel.

The headlines this week have been wall-to-wall gnashing of teeth and pearl clutching over the fate of the Kurds in Northern Syria, left to the tender mercies of the Turks.

And that has been coming most forcefully from the gaggle of AIPAC drones that inhabit the D.C. Swamp.