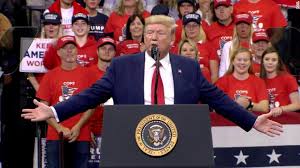 At one of his trademark rallies Thursday, President Trump tore into the Biden family, charging that Joe Biden was only considered a good Vice President because he was a complete kiss-ass.

Appearing in Minneapolis, Trump first targeted Hunter Biden, asking "Where the hell is he? Where's Hunter?"

"I have a new idea for a T-shirt. I love the cops, but let's do another T-shirt: Where's Hunter?" Trump added.

The President cited reports concerning the younger Biden's alleged pay offs by a Ukrainian gas company and by the Chinese.

The President then pointed out the press corps and declared "They are always saying the same thing. President Trump made a totally unsubstantiated claim about Hunter Biden and his father. It's not unsubstantiated, you crooked sun of a guns. It's 100% true."

Elsewhere during the rally, Trump targeted Rep. Ilhan Omar, and questioned Minnesotans reasoning for voting her in office.

"I know the people of Minnesota. I want to tell you, and I also at the same time, it's both a question and a statement, how the hell did that ever happen!?" Trump said, referring to Omars election. "How did it happen?" he repeated.