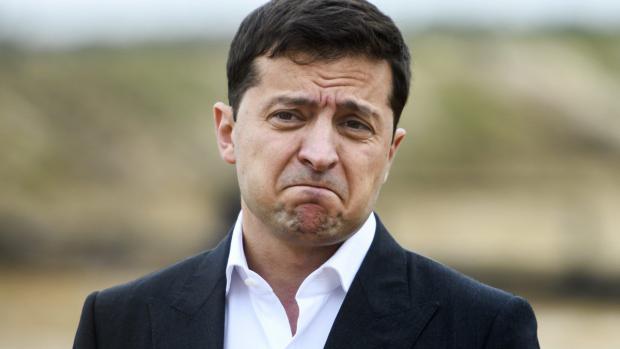 The Ukrainian president's benign interpretation of Trump's conduct is relevant to the impeachment inquiry but not dispositive.

"There was no blackmail," Ukrainian President Volodymyr Zelenskiy said today, referring to his July 25 telephone conversation with Donald Trump, the focus of allegations that the president committed an impeachable offense by trading military aid for a Ukrainian investigation of former Vice President Joe Biden and his son. "They blocked the military aid before we had our conversation, but we did not discuss it. Later we discussed it with the defense minister and he said, 'We have a problem. They've blocked this money.'"

Zelenskiy's take on the conversation is relevant to the impeachment inquiry but not necessarily dispositive, as Trump unsurprisingly argues. "The President of the Ukraine just stated again, in the strongest of language, that President Trump applied no pressure and did absolutely nothing wrong," Trump tweeted this morning. "He used the strongest language possible. That should end this Democrat Scam, but it won't, because the Dems & Media are FIXED!"

Zelenskiy, who is counting on U.S. support against the military threat from Russia, understands that Trump is likely to remain president until January 2021 at least, and possibly for another four years after that. His benign interpretation of Trump's conduct therefore should be taken with a grain of salt. It is exactly what you would expect him to say, especially if he believes Trump is using foreign policy to advance his own personal and political interests. But even if Zelenskiy is being completely candid, his impression of Trump's intent does not prove that the president "did absolutely nothing wrong," that he is not guilty of "high crimes and misdemeanors," or even that did not violate any federal statutes.

Taking that last part first, a federal official can be guilty of soliciting a bribe under 18 USC 201 even if he is unsuccessful. That bribery statute applies to any official who "corruptly…seeks…anything of value…in return for…being influenced in the performance of any official act." Receiving the bribe is not a necessary element of the offense.

Would it matter if Trump had in mind a quid pro quo that Zelenskiy himself did not infer? That's hard to say.

A bribery conviction under 18 USC 201, the Supreme Court said in the 1999 case United States v. Sun-Diamond Growers of California, requires "a quid pro quo—a specific intent to give or receive something of value in exchange for an official act." But it's not clear how explicit that quid pro quo has to be.