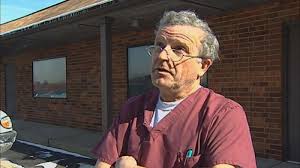 The news was horrifying.

"More than 2,200 preserved fetal remains have been found on the Illinois property of a recently deceased doctor who performed abortions, the Will County sheriff's office said in a statement. The family and attorney of Ulrich Klopfer, who died on Sept. 3, discovered 2,246 medically preserved fetal remains on Thursday while going through the deceased doctor's personal property and alerted the local coroner's office, the sheriff's office said. 'The family is cooperating fully with this investigation. There is no evidence that any medical procedures were conducted at the property,' the statement, issued on Friday, said. Will County is located about 45 miles (72 km) southwest of Chicago. The Will County Sheriff and Coroner's office could not immediately be reached for comment on Saturday." (09/15/19)

One thing that the 20th and 21st Centuries have given mankind is the ability to commit mass murder on a retail scale.  This is nearly as sickening as the evil actions of abortionist Kermit Gosnell of Philadelphia, perhaps because we don't know all the details of just how more than 2,000 dead babies ended up in pickle jars in this man's basement.

What we do know is that each of these bodies is a dead child.

For centuries, Americans (and proto-Americans) lived lives of hypocrisy for having freedom and liberty while denying that to so many slaves (Black, AmerInd, Irish, and more) in their midst and by claiming and exercising human rights (given by God) while denying those rights even to people in this very land.  It was more than just failing to live up to ideals: it was blindness that is harder to forgive.

It is sad that finally ending those injustices, those sins, those deeds of evil, almost always came at the cost of stealing liberty from other people.

As a result, we have become hardened, as a people.  We see it in this very situation: the rights of women are furthered (supposedly) by stealing ALL rights from others: not just males, but females as well. (Too many people refuse to recognize that roughly half of all babies killed in the womb are girls.)

I realize that there are many libertarians – people who claim to be lovers of liberty – who will disagree with me.  Most will use, as an excuse, the idea that the fetus is not really a human until he or she is born, and before birth, she or he is nothing but a "blob of cells" or just a "part of the woman's body" or even a parasite.