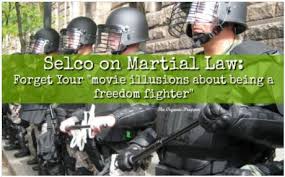 Let's talk about martial law. This is when the normal law of the land is suspended and the authority comes from the military or federal government.

One recent example of undeclared martial law in the US was when the police were looking for the suspects in the Boston Marathon bombing and went door to door, forcing innocent people to come outside with their hands on their heads at gunpoint, while their homes were searched without warrants.

It turns out that many of us have some serious misconceptions of what it's really like to live through a martial law situation. I asked Selco, who has personally been through it, to clear up the myths and tell us what it's actually like. You can always count on him for the unvarnished truth, and that's what we need to be prepared to survive extreme situations.

Would you say that your city in Bosnia was under martial law for any part of your ordeal? How long did it last?

During Yugoslav wars, in different regions (states) based on particular timing and events you can say that martial law was in place, or "state of direct war threat" as some call it here.

There were different "stages" or even levels of it, but one common fact is that during that all normal civil rights and laws were completely and absolutely a matter of the will of the "war government." (Or "military council" or "war headquarters".)

The names were different for different regions, even cities, but the results were the same.

In the case of my city in that particular time, it was "war government" that had little influence on ordinary citizen simply because there were too many factions.

But prior to that time and after that year I experienced and went through something that looks more like real "martial law" as your readership imagines it.

Many people in the prepper community think they'll be able to take on the militarized police or army rather than bending to the new rules. How do you think that will go? Can you give any examples of people attempting to defy the military?

Yes, I am aware that lot of preppers imagine martial law to be like some black and white situation (with clear causes, solutions, and views). In reality, it is quite different.

It is a situation where all stakes are much higher, and solutions-actions  that the government ( ruling  party, military leaders or whoever in your case) wants to achieve will be attempted with all means. That can include some new rules where what you think about it usually does not mean anything.