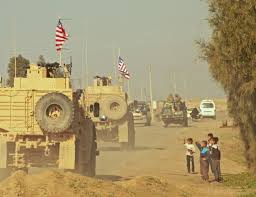 Democrats, Republicans, the mainstream press, and all the other Washington, D.C., interventionists are up in arms over President Trump's decision to relocate a few U.S. soldiers within Syria. Based on their hysterical reaction, you would think that the United States was about to be invaded and conquered by some new or old official enemy, like communists, terrorists, Muslims, illegal immigrants, or drug dealers.

In this particular case, the official bugaboo is ISIS, the group that, ironically, was the direct consequence of U.S. interventionism in Iraq. Apparently, there were people in the Middle East who didn't take kindly to a foreign imperialist power invading and occupying a country that had never attacked the United States and killing, injuring, and destroying hundreds of thousands of people in the process.

But let's not go overboard. ISIS is not coming to get us, any more than the communists were coming to get us during the Cold War. For that matter, neither are the terrorists, Muslims, drug dealers, illegal immigrants, Russians, Chinese, North Koreans, Vietnamese, Cubans, Iranians, or any other scary boogeymen.

The fact is that no one is coming to get us by taking over the federal government and running the IRS, the public schools, the Interstate Highway System, Social Security, Medicare, or any other socialist program of the federal government. That's because no private group or nation-state has the military capability, the money, the armaments, the troops, the transport system, or even the interest in crossing the oceans and invading and conquering the United States.