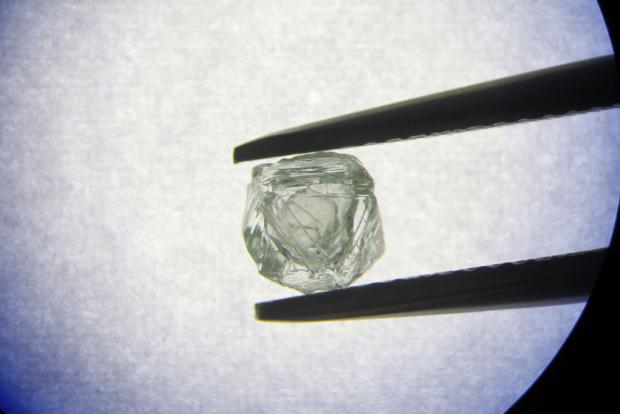 It is a diamond with another diamond that moves freely inside it, earning it the name the Matryoshka diamond for its resemblance to traditional Russian nesting dolls.

The unusual diamond was discovered during a sorting process in Nyurba, a mining town in eastern Russia. The outer diamond measures just 4.8 x 4.9 x 2.8 mm, and its internal cavity is 6 cubic mm. The tabular-shaped internal diamond bouncing around in this cavity measures 1.9 x 2.1 x 0.6 mm, and has a volume of 1.6 cubic mm. The diamond weighs a total of 0.62 carats (0.124 g), with the internal diamond estimated to account for 0.02 carats (0.004 g) of this.

Scientists working in the Research and Development Geological Enterprise of Alrosa, the partially state-owned diamond company that runs the Nyurba diamond mine, have subjected the Matryoshka diamond to various analyses, such as infrared and Raman spectroscopies, and X-ray microtomography, and estimate it may be over 800 million years old. As for how it formed, they have a couple of ideas to explain how the internal diamond came first and was subsequently encased in the external one.

"We have two main hypotheses," says Alrosa's Oleg Kovalchuk. "According to the first version, a mantle mineral captured a diamond during its growth, and later it was dissolved in the Earth's surface. According to the second version, a layer of porous polycrystalline diamond substance was formed inside the diamond because of ultra-fast growth, and more aggressive mantle processes subsequently dissolved it. Due to the presence of the dissolved zone, one diamond began to move freely inside another on the principle of matryoshka nesting doll."