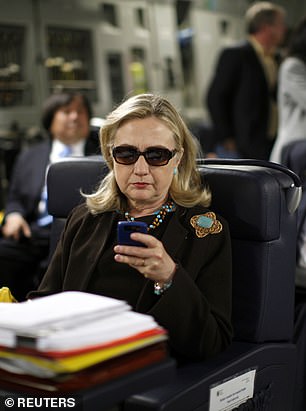 A technician tasked with rifling through Weiner's iPad, iPhone and laptop in September 2016 found 340,000 emails between the Secretary of State and her top aide Huma Abedin, Weiner's estranged wife, with many using a hillaryclinton.com address.

The investigation into Weiner's devices began when DailyMail.com revealed that the disgraced congressman had an online sexual relationship with the troubled teenager for months and sent her lewd messages and pictures.

One agent in the FBI team compared the discovery of Clinton's use of a private email server to 'dropping a bomb in the middle of the meeting', James B. Stewart writes in his new book Deep State: Trump, the FBI, and the Rule of Law.

But the shocking discovery went ignored at the FBI because senior officials were 'overwhelmed' by the investigation into Russian meddling in the 2016 election, Stewart wrote.

Nobody at Quantico was taking action, so one agent went outside the chain of command and shared the allegations with New York prosecutors, which led to James Comey reopening the investigation days before the 2016 election.