> Why "Joker" is a Disturbing Film, and Why that's Good - Freedoms Phoenix 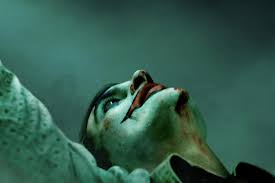 I noticed the police officer standing just to the side of the young lady who scanned our tickets as my husband and I went to see "Joker" this past weekend. Part of me was glad for the extra security; another part recognized that "monopoly-police officer in cinema" does not necessarily equal "extra security", and may in fact put us all in more danger; yet another part was just angry at our society's normalization of violence and acceptance (and even ecstatic celebration) of more violence as a response, combined with a refusal to examine any of the real underlying causes of that violence. Still another part of me just thought "Oh, what a clever PR stunt!"

But that's me: Lots of competing voices, often saying conflicting things, and all of us having to work it out in my head, sometimes with the help of my husband or someone else nearby, sometimes not. Which is a big part of why I'm thinking this film hit me so hard.

We got into the cinema in time for some of the trailers for films about how the good guys blow the heads off the bad guys with guns, although we missed out on the military-recruitment ad glorifying the use of guns and bombs and other weapons against masses of people in foreign countries who have never done anything to any of us, on behalf of the military-industrial complex.

Which was fine, because we were here to see the film that was "controversial." The one that people were walking out of because it was "too violent." The one that showed us a mentally ill man killing a handful of people rather than hundreds of villagers in some remote country. That film.

And I have to say, it was very hard to watch. But not for the reasons I'm hearing about. Not because it was "violent." (Please. Did anyone get there in time for the military recruitment ads?) And not because of the "gun violence" (which, for some reason nobody ever explains, is worse than other forms of violence.) Because it was "realistic"? Yes, partly. It's a lot easier to watch the Avengers battle it out because their world and the violence in it is far enough removed from our own. But that's only part of the answer.

I can only speak for myself, but I suspect that I'm not alone in my response. I was disturbed by this film, and it is still stuck in my head now, making little comments at me throughout the day, so much so that I can't even get to the work I need to do, but have to write this instead. Here's why I was disturbed by "Joker": I saw myself in it.

I don't mean that I'm afraid I might have it in me to go around killing innocent people (or, convincing myself that those people really aren't innocent and that I should kill them). I know myself well enough by now to know that that's not me, that I'm not mentally ill in the way that that character was, and don't have the capacity for that kind of violence. But am I a little "off" sometimes? Could I ever be pushed to commit acts I don't now approve of? Do I sometimes see the world in ways that the people around me don't?

OK, that's a silly question - of course I do, because the people around me are so very wrong so much of the time.

See what I mean?

What Joaquin Phoenix, (with the help of Todd Phillips and Scott Silver) accomplished here was something that probably every actor attempts to do with every role, but that I've never seen done to this extent before: He brought us inside the mind and the person of someone so far removed from who we are that we would have thought it impossible. He made us see ourselves in this most horrifying, broken, and reprehensible character.

For me, it was the dancing. Sure, there were other things: The fantasizing about how others might see me, the inner anxiety and self torment, lots of the little details. But what got me was the dancing. As he begins to transform from a victim of violence into its perpetrator, he begins to dance. And as sickening as it is, it is also beautiful.

It is beautiful because we are seeing this badly broken and twisted person who we have come to identify with, finally take some power over his life, finally refuse to be a victim, and not only "fight back" (I know, that's not actually what he was doing except that one time) – but to dance! To make his life his own expression and not only a reaction to those who assault him. And it is also beautiful because we all do it too. Everyone has a dance inside of them, and we all do our little dances by ourselves, when we're dong the laundry or fixing dinner. We all have our dances, and they all mean something. Even Arthur.

I KNOW. I know it's twisted and wrong. I know he's not heroic. And I don't believe the film portrayed him as heroic. He is a tragedy, both for himself and everyone around him, and I do think that is the perspective of the filmmakers. But inside of that tragedy, inside this horrible, horrible story… a little piece of me was cheering for him when he started to dance. And I don't think I was alone.

That we – any of us – can see a bit of ourselves in this horrible, evil, twisted character, is disturbing. It is also necessary. Our culture is way too full of self-righteous shaming of everyone else, of being so quick to point out the tiniest of flaws or transgressions, as if the only choices in life are to live up to a perfectly pure standard of flawlessness, or to be dismissed as a degenerate. There is very little room for everyone in between (which is most of us), and so there is an awful lot of pretense and lying, and people pretending to be just like everyone else. We need very much to be able to see, and to admit, that we all have our dark corners.

Rock 'n' drool! Father records his baby son's noises over a year and edits them to sound