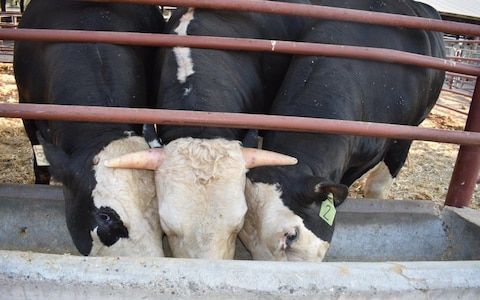 Grasping the bull by the horns could soon be a distant memory for British dairy farmers after scientists genetically engineered male animals to rid them of their dangerous prongs.

Dairy cattle typically grow horns, which can injure farm workers, ramblers and dog walkers, so they are usually removed when the calf is young, in a process known as 'debudding'.

As well as making the animal safer, dehorning also makes it easier to pack bulls into pens and trucks because horns take up space, but the process is extremely painful for the animal.

Now scientists at the University of California, Davis, have successfully bred hornless bulls after splicing the 'hornless' gene from Aberdeen Angus cattle into the widespread black-and-white Holstein dairy cows so that they are born without protrusions.

Instead they simply grow soft hair on the parts of their heads where hard mounds normally emerge.

Two years on from the first genetically engineered calves, researchers have confirmed that their offspring also do not have horns, a major success which could allow the farming industry to bypass decades of selective breeding.

"We've demonstrated that healthy hornless calves with only the intended edit can be produced.

"They were not noticeably more aggressive – although must admit I would not go in the pen woth any of them as they weigh around a ton and can be dangerous with or without horns!"

Horned cattle are major headache for British farms because they cause significant risks for handlers, other stock, or members of the public. Only a few breeds, such as the Hereford and Angus do not have horns.

Around five people are killed in accidents each year, with 74 fatal attacks since 2,000 according to the Health and Safety Executive (HSE).

Analysis by the US Food and Drug Administration (FDA) showed the fragment of DNA used to introduce the hornless trail had successfully integrated into the offspring, meaning their calves should also lack horns.

Scientists did not observe any other unintended genomic alterations in the calves, and all animals remained healthy during the study period.

Perspectives on the Pandemic with Dr. John Ioannidis