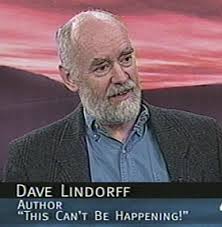 Dave Marash: For the first time ever, I am turning over the writing of much of this introduction to our guest today, investigative reporter Dave Lindorff –- which is to say, I'm simply going to read to you excerpts from his piece in the August, 22 edition of The Nation.

Dave and his wife were about to board a plane at Heathrow Airport in London when they showed their boarding passes to security.  Dave's wife got through.

"A security attendant pointed me to a transit desk where I could get a new boarding pass printed. An agent there ran a new card and then pressed a rubber stamp on it before handing it to me. Spotting, in fresh red ink, the words 'ICE Security,'

"I asked, 'Why's a stamp from the U.S. Immigration and Customs service being put on my boarding pass here in the UK? I'm not an immigrant.'

Marash:  "The ticketing agent replied, 'That's being done at the request of your Homeland Security Department, sir. You are on their list.'

So what?  They were through the wicket, inside Heathrow's secure pre-board area.

Lindorff again: "Suddenly, I heard my name on the terminal's main PA system: 'Mr. Lindorff, report immediately to your gate for a special security check!'

"Arriving at the gate, I announced myself, and the gate attendant immediately said into his walkie-talkie, "The Lindorffs are here.'"

Marash: Quickly they were walked somewhere else.  Dave's phones, computer and his hands were all checked for traces of explosives.  His suitcase was rummaged.  He and his wife were free to go.  But first –-

Back to Lindorff: "I said, 'I am a U.S. journalist with no criminal record. Why am I being treated like a suspected terrorist?'

'We don't think you are a terrorist,' the security officer replied. 'It's your Department of Homeland Security that's telling us do this.'

"I said, 'I get it. I'm a journalist and my government doesn't like journalists.'

'We know you have a lot of problems right now in the U.S..'"

Marash:  If it sounds to you like Lindorff's constitutional rights were violated, it sounds like a federal judge would agree, and he's given the lawyers for the plaintiffs, the Council on American-Islamic Relations, who sued against similar treatment, and for the FBI, till October, 18 to figure out a better way to protect the national security without trashing innocent civilians' constitutional rights…