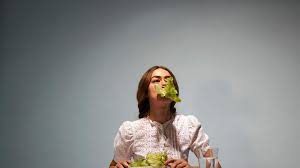 It's not necessarily a bad thing to eat this way, but sometimes these kinds of food preferences can begin to take over people's lives, making them fear social events where they won't be able to find the "right" foods. When a healthful eating pattern goes too far, it may turn into an eating disorder that scientists are just beginning to study.

Alex Everakes, 25, is a public relations account executive from Chicago. As a kid, he struggled with being overweight. In his teens and 20s, he tried to diet, and he gained and lost and regained about 100 pounds.