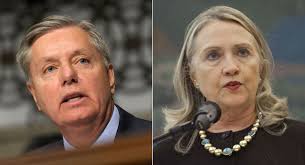 Update 2: The NatSec hawks are already coming after President Trump for his decision to allow Turkey carte blanche in Northern Syria. And not just his fellow Republicans.

During an impromptu phone interview with Fox & Friends Monday morning - a show that President Trump rarely misses - Senator Lindsey Graham blasted Trump's plan, particularly his decision to abandon the Kurds to Turkey, warning that any pull back by the US would hasten the revival of ISIS.

Graham said that "the biggest lie" being told by the administration is that ISIS has been "defeated." They're merely lying in wait, Graham warned. And with the US gone from the region, the Kurds will have no choice but to ally with the Assad regime and Iran if they want to survive. Meaning the US will lose an important strategic ally in the region.

He went on, saying the decision is "short-sighted and irresponsible" and that after abandoning the Kurds, "no one will ever trust us again" in the Middle East region. Graham added that he would sponsor a resolution urging Trump to reconsider this decision.

ICYMI:
Spoke with @foxandfriends this morning about the latest news on Turkey and Syria.

Okay. Let's do the withdrawal and see. Consider. Most of those people over there are Muslims. And most of them are so ignorant about their religion that they don't realize that it is a religion of violence - http://www.thereligionofpeace.com/quran/023-violence.htm. It's written right in the Koran and the Hadiths. ISIS is the part of the Islamic religion that is obeying Islamic law. If they like their religion so much, do what ISIS does. Obey the law of their religion. Get ISIS back for an example of how to obey.

FIND THE BEAUTY IN THE CHAOS: BYRNE, BERGY & HRC BOMBSHELL

BREAKING: Patrick Byrne, former CEO of Overstock.com, claims that he was complicit in