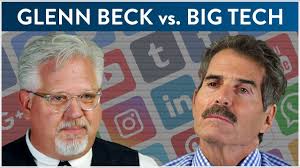 Social media companies like Facebook don't show you all your friends' posts. You may think they do, but they don't. Instead, an algorithm picks which ones to show you—and which not to show you. How do they decide? The companies won't reveal the details.

Beck says Facebook reduces his posts' reach. And he notes that when a video made fun of Democratic Speaker of the House Nancy Pelosi by slowing down her voice, Facebook put a warning on the post and reduced its reach.

In Portland, Oregon, antifa thugs attacked journalist Andy Ngo because he had criticized the group's violent tactics. They kicked him and punched him in the head. The attack left Ngo with brain damage.

But the account of the local group, Rose City Antifa, is still on Twitter. The group justifies the attack on Ngo on their website: "If you rally the far-right to attack our city and profit by their violence, you are one of them. And the community will stop you, however it can."

"In Austin they were actually calling for the next phase to have people be a paramilitary operation. That was up forever," he tells Stossel.

The Austin antifa group's Facebook page is still up, linking to a manifesto calling for antifa's opponents to be "beaten bloody…annihilated."

Stossel pushes back at Beck: "They must hire some Republicans, too."

"They do, but it's about 20 percent and they're not from top-level positions," Beck replies.

"It bothers me that there are so many conservatives [who] want more regulation," Beck says.