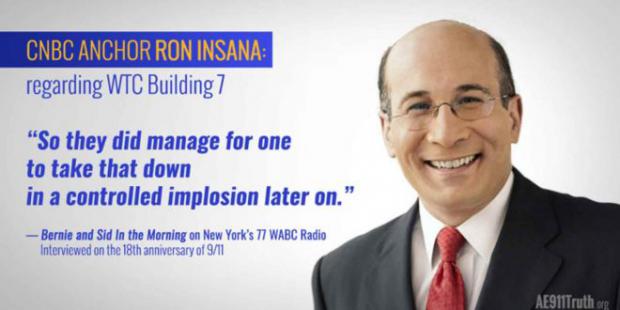 On September 11, 2001, at 5:20 p.m., World Trade Center Building 7 suddenly collapsed into its own footprint, falling at free fall speed for 2.5 seconds of its seven-second complete destruction. WTC 7 was not hit by a plane. After it collapsed, Americans were told that office fires caused a unique — never before seen — complete architectural failure leading to the building collapsing into its own footprint at the rate of gravity.

For more than a decade, many Americans never even knew WTC 7 fell—up to and including the person who was Secretary of Defense when the towers came down, Donald Rumsfeld.

In 2011, Donald Rumsfeld went on a radio and television tour to promote sales of his revisionist memoir. Of course, most hosts refused to ask him any questions of substance. However, one radio host hailing out of Chicago, Mancow Muller, was unafraid of asking hard-hitting questions.

On the show, Mancow asked Donald Rumsfeld what his thoughts were on World Trade Center Tower 7. His answer was ridiculous.

"What is building 7? …I've never heard that before." said Donald Rumsfeld

Amazingly, some folks still believe that only two towers fell that fateful day back in September 2011. The fact that Tower 7, a 47-story building, collapsed, was but a small blip in the media. Since 9/11, World Trade Center Tower 7 is rarely, if at all mentioned in the mainstream media. However, all that now appears to be changing thanks to the persistence of thousands of dedicated individuals who've devoted large portions of their lives to making sure this information gets out there.