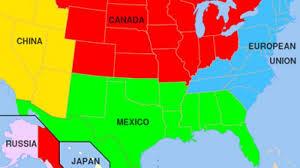 Through the research of Marilyn Rupar and myself, we have established the fact that a major area of military operations is being organized, right now, both inside of Venezuela, off the coast of Venezuela and on the Venezuela-Colombian border. Previous parts of this series have established the fact that most of Latin America supports the Russian-Chinese-Venezuelan contingent which will oppose Colombia-El Salvador and ultimately the United States.

In two previous articles, the CSS made the case that the United States military would be drained in the Middle East and then the "real conflict" would commence in South America and eventually spread north to our border and would laregely be unopposed because the American military will be rendered inept and weak. However, this looming Red Dawn Invasion force has allies in the form of 5th column forces inside the United States.

The contemporary anecdotal stories are rushing in and they serve to further validate what we have known for a long time, namely, bad-intentioned UN troops are poised for the takeover.

A  former Q Alert posted at SteveQuayle.com, stated that the United Nations is  preparing for what I have written about in the previous paragraphs.

This does not come from a high level source. Just an everyday average Joe. But a guy that works in the same industry, that always gave a hard time about the tin hat-stuff, recently returned from a Great Divide Concert at which a gentleman just passing by, stopped to mingle with this group of people. They had a couple of drinks, and this guy states, he likes America, he likes the people. He wished he could dance like, the Americans. Laugh. He states he had been fighting beside US troops over past 6-7 years. And this is why I feel I need to tell someone over here in the states a lil something. He said he was from Norway. And he would be back in 3-4 months as a part of UN troops. He said there was nothing he could do. But felt compelled that he needed to say something, just to let such good people know what is coming. He said that they were going to be going door to door taking guns, or shooting to kill. They already had the lists of names, and addresses. I have no reason to not believe the words from acquaintance. It actually pretty much freaked him out. He is rather overwhelmed from the conversation.