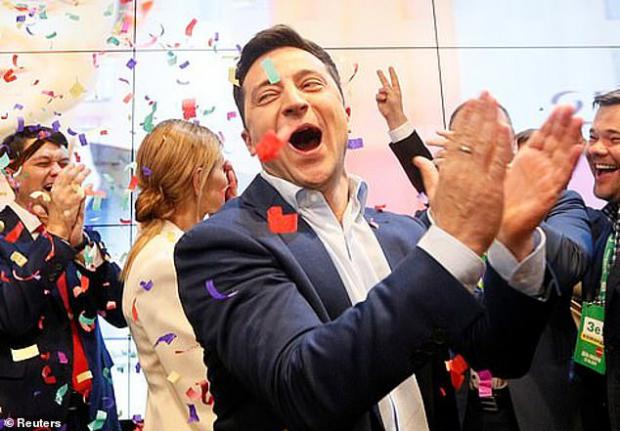 Volodymyr Zelensky, who once played a hapless President on TV but was elected to the real-life presidency in April, put on the mock presentation for guests at a summit in Yalta earlier this month.

The video pokes fun at a a range of global issues including Russia's annexation of Crimea and North Korea's nuclear ambitions, prompting uproarious laughter from the crowd.

It was shared by Indian police officer Rema Rajeshwari, who had friends at the conference in Ukraine.

At the start of the imaginary WhatsApp chat, entitled World Leaders Group, Zelensky introduces himself to his colleagues and is met with greetings in various languages.

Britain's initial response is unintelligible, prompting bafflement from its European allies - perhaps an allusion to Brexit.

A UK message is eventually provided by Prince Harry, who says 'Grandmother [meaning the Queen] wanted me to write that she is very happy to see everyone'.