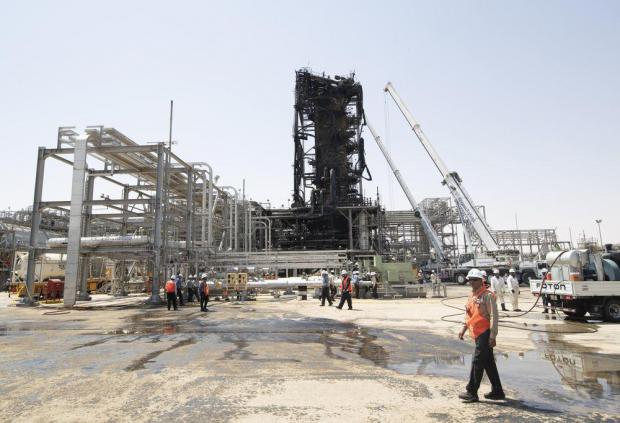 Much of the attention concerning the crippling damage to Saudi Aramco facilities struck in last week's aerial attack ultimately blamed on "Iranian sponsorship" by US and Saudi officials has focused on Abqaiq processing plant, but on Friday the first on the ground images from the kingdom's giant Khurais oil field — the country's second largest — have been revealed, showing scorched infrastructure, ruptured pipelines, and "a mess of oil melted to asphalt, twisted and charred metal grates" according to an on site Bloomberg report.

And yet Aramco has remained insistent that the field will return to pre-attack output levels this month, after the company reported losing half its daily output in the aftermath of the early Saturday attacks, impacting a whopping 5% of total global supply.

Per Bloomberg, Khurais has a capacity of 1.45 million barrels a day, processing all oil on site; however the attack took out four 300-foot towers essential to the production process.

Like at the Abqaiq processing plant nearer the coast, the strikes — whether by drones or ballistic missiles (debris showed by the Saudi Defense Ministry this week featured both) — appeared remarkably precise.

The Saudis have counted a total of twenty-five drones and missiles used in the twin attacks, after statements by Yemen's Houthi rebels claimed ten drones were used.