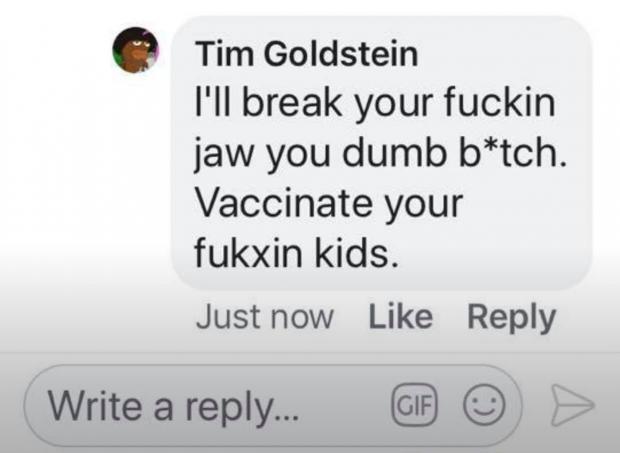 "If you don't vaccinate your child I will coward punch it if it comes near me."

Whether paid pharma trolls or actual persons, the comments made by those in the screenshots above are directed against a real parent and, it is safe to say, are intended to intimidate and dehumanize anyone exercising their Constitutionally protected First Amendment rights to abstain from vaccination for religious or philosophical reasons (rights which, recently, have been lost in states like California, New York, and Maine).

In another gesture of violence, screenshotted below, Tim Goldstein says: "I'll break your fucking jaw you dumb "b*tch. Vaccinate your fukxin kids."

These social media comments bring into high relief a concerning pattern already well established throughout mainstream media representations of the vaccine-hesitant or skeptical (so-called "anti-vaxxers"). The mainstream media's primary funder, of course, is the pharmaceutical industry, which explains why much of the news has been weaponized against those exercising their Constitutionally protected health freedoms, as well as against informed consent and the parent responsibility and right to protect their children.