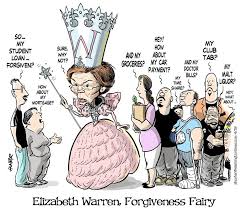 Unlike the 2016 Democratic presidential candidate, Elizabeth Warren doesn't radiate contempt, loathing, and horror at the task of mingling with the hoi polloi. Rather, she has become famous for staging lengthy sessions after campaign speeches to pose for selfies with her fans. The selfie-seekers, you will notice, are all women. It's heartwarming as all get out. This is at the center of Senator Warren's strategy for winning the next election: to cadge all of the women's vote and become the President of all the women of the United States.

It's a shrewd strategy, to turn the election into a gender-bonding contest, but elections have turned on equally fatuous premises, probably more often than not. Paradoxically, the lumbering President Trump, with his bay window belly, mystifying bouffant, fourth-grade vocabulary, and grab-them-by-the-pussy approach to romance, scored 53 percent of women's votes last time around. Perhaps that was more a reflection of his opponent's titanic loathsomeness than of Mr. Trump's charms. But it only underscores Ms. Warren's gambit: all she has to do is swing a generous majority of American women over to her side.