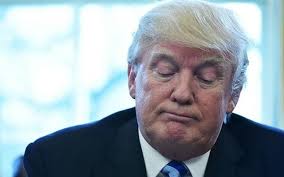 The Bronx-based judge, Doris Gonzalez, wrote that Trump's testimony is "indispensable" to the trial, which is scheduled to begin Thursday. She wrote he must therefore be examined by videotape before then, though Trump is likely to ask for a delay.

The protesters argue Trump, his campaign and business should be held liable for the actions of security guards who were working for the company. They say, even if Trump didn't directly order the guards to act, he had control over their actions because they were his employees and his campaign trail rhetoric gave them the impression that violence would be condoned.

The suit alleges Trump's head of security, Keith Schiller, punched one of the men in the head while trying to grab from him a sign that read, "Make America Racist Again!" Schiller has said he was simply trying to make space on the sidewalk and that he struck the protester only after the man grabbed him suddenly from behind.