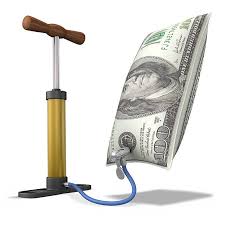 The Fed will offer up to $75 billion a day in repurchase agreements -- exchanging secure assets for cash for very short periods -- through October 10, it said in a statement.

In addition, it will offer three 14-day "repo" operations of at least $30 billion each.

Banks have struggled in recent days to find the cash needed to meet reserve requirements which has pushed up short-term borrowing rates, prompting the New York Fed to pump billions into US money markets with repo operations over the past four days.

However, in a sign a cash crunch could be easing, demand for liquidity on Friday did not significantly exceed the amount offered, as it had on two prior days.

After October 10, the New York Fed will "conduct operations as necessary to help maintain the federal funds rate in the target range, the amounts and timing of which have not yet been determined."

Federal Reserve Chair Jerome Powell this week downplayed concerns about the money market's cash crunch, saying it was not a sign of problems in the wider economy or a concern for monetary policy.