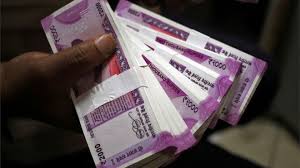 It had been a bad year for India, which until recently was the fastest growing economy in the world, surpassing even China: the world's 2nd most populous nations printed a Q1 GDP of 5.0% for fiscal q1 2019/20, as India's economic activity slowed to the lowest rate in 6 years, with Rabobank earlier this week noting that a rebound in growth to 6% seems likely given the substantial widening of India's output gap. Yet one thing could spark such a bounce and "lift the spirits in the Indian economy" according to Rabo: a substantial stimulus package.

That's precisely what the Indian government unveiled overnight, when without warning it pulled a page right out of the Trump playbook, and in an effort to boost stocks stimulate the economy, it announced a surprise $20 billion tax cut, bringing India's corporate tax rate to one of the lowest in Asia.

However, unlike Trump's tax cut, this one had a twist - it would be entire funded by the central bank's remittance of cash to the government.

Some background: according to the finance ministry, domestic companies will pay 22% tax on their income from April 1, 2019, down sharply from 30% previously. The effective rate, including all additional levies, will be 25.2% and applicable on companies that aren't availing any incentives or exemptions.