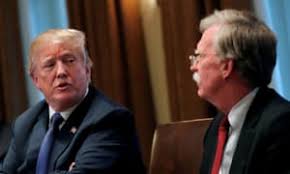 For any leader, it is important to have a few advisors who come across as total psychopaths. It keeps your enemies (and friends) on their toes.

But what happens when your key foreign policy advisor actually is completely insane, and an ignoramus to boot? President Trump found out first hand with John Bolton. Fortunately for his administration, and for world peace, he took corrective action.

On Tuesday, President Trump fired his National Security Advisor, John Bolton. "Fired" is the word. It's used in English when somebody is immediately dismissed. Trump announced his decision through Twitter. And he frankly explained to journalists that A: Bolton didn't get along with the president's team at the White House and B: He made major foreign policy mistakes. As an example, Trump mentioned Bolton upsetting the positive dynamics in the North Korea negotiations when Bolton decided to threaten Kim Jong-un with the Libyan scenario.

The Libyan scenario is when the country is bombed, its leader, Muammar Gaddafi, is killed, and the state is destroyed, with the people put back into the Middle Ages. Trump doesn't conceal now that after Bolton's words about the Libyan scenario for North Korea he was enraged. However, he was silent about it at the time, letting Bolton claim that he had no disagreements with the U.S. President. And all the rumors about those disagreements are evil, fake stories, coming from enemies and, above all, from Russia. The American press, via the NY Times and Bloomberg, pleasingly assisted Bolton, spreading the White House unanimity thesis, which was, as it's absolutely clear now, fake.