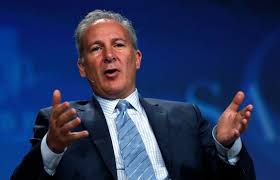 The central bank successfully pulled this off after the 2008 crisis. By dropping rates to zero and holding them there for nearly a decade, and running three rounds of QE, the Fed has reinflated the real estate bubble, blown up a bond bubble and pumped up the stock market. But Peter said it's not going to work the next time around. Instead, Fed monetary policy will tank the dollar and lead to an inflationary recession.

So, why can't the Fed pull off another rescue? Peter explained why he thinks it's not possible during an interview on the Tom Woods Show.

Peter admitted he didn't think the Fed could rescue the economy in 2008.

I underestimated the ability of the Fed to get away with quantitative easing and for the world to basically accept this and to enable this."

The question is — the Fed did it before, can it do it again? Peter said he wouldn't bet on it.

I would not want to bet that is possible given the enormity of the problem now."