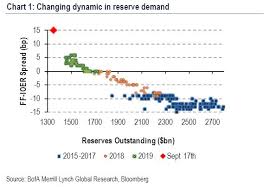 This, as we showed with the following chart, would require some $400 billion in new reserves for the FF-IOER spread to normalize.

To the disappointment of many, Powell did not do that, and instead, the FOMC realigned both interest on excess reserves (IOER) and the reverse repo (RRP) rate lower by 5bp, resulting in 30bp cuts to both rates. Powell also noted during his press conference that the Fed would use temporary open market operations (OMOs) "for the foreseeable future" to address pressures in funding markets.

However, and the reason why stocks shot up just before 3pm ET, is that that's when Powell added that "it's possible that we'll need to resume the organic growth of the balance sheet, earlier than we thought. ... We'll be looking at this carefully in coming days and taking it up at the next meeting" in late October. Said otherwise, the Fed may not have announcer QE4 yesterday, but it will likely announce it in the very near future.