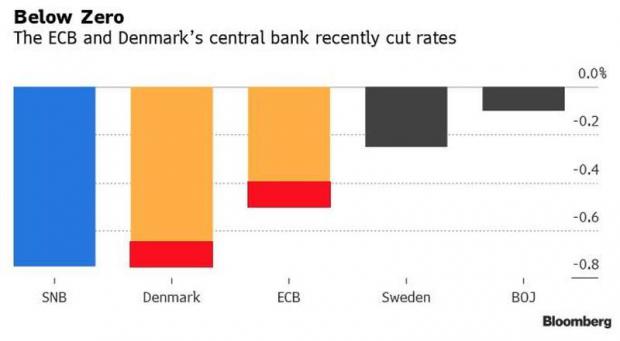 Swiss lenders, many of them focused on wealth management, have to weigh the prospect of continuing to lose money on the cash deposits against imposing fees that could prompt some of their most valuable customers to jump ship.

However, after five years of NIRP, and with the ECB set to unleash even more negative rates in the immediate future, one bank finally took a stand earlier this summer when UBS announced plans to charge a negative interest rate on wealthy clients, those who deposit more than CHF 2 million with the largest Swiss bank.

And now, two months later, as rates fall ever more negative, Bloomberg reports that Credit Suisse also plans to impose charges on its  wealthiest clients in order to spread the pain of negative interest rates.

Credit Suisse had warned this was coming:

"In Switzerland, we are considering measures on deposits to mitigate pressure of negative interest rates," Tidjane Thiam, Credit Suisse CEO said during a discussion of the bank's half-year results. And like UBS, the Credit Suisse levy would be "targeted on people . . . that measure their cash balances in millions."