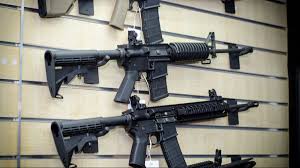 One candidate by the name of Robert Francis "Beto" O'Rourke (known to Real Texans and Real Mexicans as The Fake Mexican) adamantly announced his intentions to confiscate the firearms of peaceful American subjects.

"Hell yes, we're going to take your AR-15, your AK-47," the former El Paso congressman said. "We're not going to allow it to be used against our fellow Americans anymore."

Not surprisingly, this assertion brought a rousing response from those who would object to such a criminal action. One of those objecting was Texas State Rep. Briscoe Cain. His response was equally inflammatory:

"My AR is ready for you, Robert Francis."

Being the typical, loud mouthed, bullying coward, O'Rourke took Mr. Cain's blunt eloquence as a "death threat." He was so offended, he even reported Mr. Cain to the DC Regime's version of the Gestapo.

But just who is issuing "threats" in this exchange?