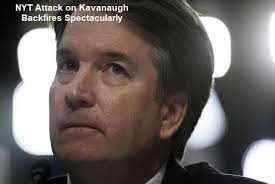 On September 14, the New York Times resurrected unsubstantiated and graphic rumors about Supreme Court Justice Brett Kavanaugh in a purposeful smear article Brett Kavanaugh Fit In With the Privileged Kids. She Did Not.

The article was by disgraced NYT authors Robin Pogrebin and Kate Kelly to promote their upcoming book "The Education of Brett Kavanaugh: An Investigation."

I do not normally report on sleaze but to understand what the NYT did, I have to.

Here is one controversial paragraph.

"We also uncovered a previously unreported story about Mr. Kavanaugh in his freshman year that echoes Ms. Ramirez's allegation. A classmate, Max Stier, saw Mr. Kavanaugh with his pants down at a different drunken dorm party, where friends pushed his penis into the hand of a female student."

The NYT later added this correction.

"The book reports that the female student declined to be interviewed and friends say that she does not recall the incident. That information has been added to the article."

That's one hell of a correction don't you think?

Making matters worse for itself, The NYT came out and blamed it all on an "editing error".

Reporters Robin Pogrebin and Kate Kelly said in an interview on MSNBC that they wrote in the draft of their Sunday Review piece that a woman who Kavanaugh was said to have exposed himself to while a student at Yale had told others she had no recollection of the alleged incident.

Their editors, they say, removed the reference. "It was just sort of. . . in the haste of the editing process," said Pogrebin.

The editor responsible for editing the Kavanaugh piece, Times Deputy Editorial Page Editor James Dao addressed select questions about the piece on a Times "Bulletin Board" posted on Monday and updated Tuesday. But he did not address why the information about the woman's recollection was removed from the story.

Are You Outsourcing Your Truth? - Authentic JP

Tucker Carlson Eviscerates the Media for Ghoulish Anti-Trump Behavior, Then Hits Them Even Harder