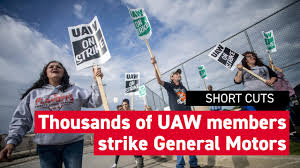 The effort would effectively put the White House on the side of the United Auto Workers.

The White House is seeking to end the United Auto Workers strike against General Motors with an agreement that would reopen an assembly plant in Lordstown, Ohio that GM shut down in March.

The effort, described to POLITICO by two people close to the matter, would effectively put the White House on the side of the UAW. Some 48,000 GM workers went out on strike Monday demanding higher wages, more generous health care benefits and more job security than management has been willing to offer in a new contract.

If the effort is successful, it could boost the president's reelection chances next year in Michigan and Ohio, where his approval rating has been slipping since the two states helped him to victory in 2016. President Donald Trump has tried to woo blue-collar workers by promising a manufacturing revival, but he's criticized union leaders and has a fraught relationship with the automakers. His Justice Department recently opened an antitrust probe into four automakers, not including GM, that are cooperating with California as it tries to bolster clear air rules.

One person close to the matter said National Economic Council Director Larry Kudlow and White House trade and manufacturing adviser Peter Navarro are both involved in the talks. This individual, who was not authorized to speak publicly, cautioned that discussions are still in early stages and that the White House may not be able to broker a deal.

In remarks to reporters Monday at the White House, President Donald Trump said, "Federal mediation is always possible, if that's what they want. Hopefully, they'll be able to work out the GM strike quickly. We don't want General Motors building plants outside of this country."