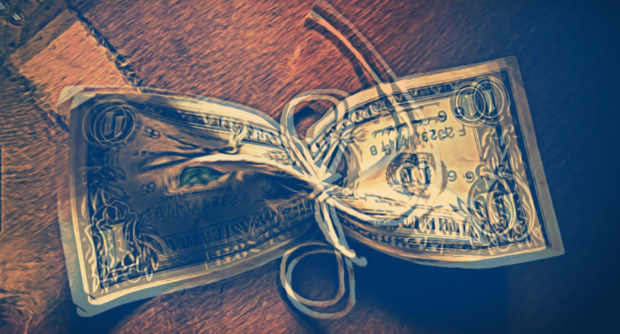 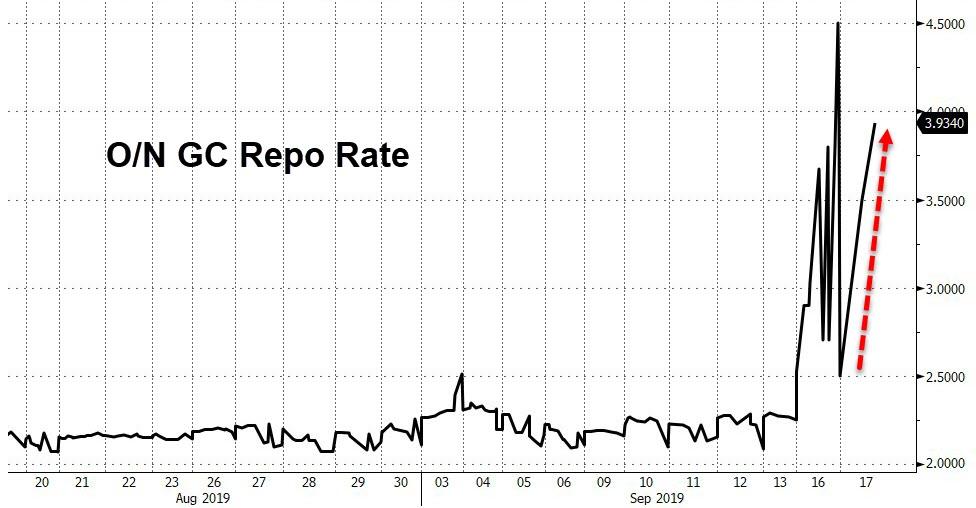 In context, this is quite a move... 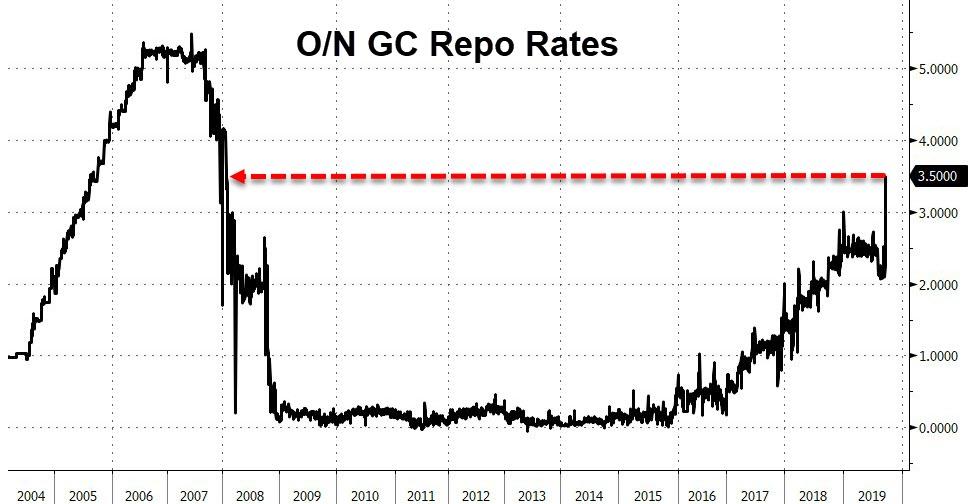 Bottom line: here's what the market thinks of the Fed's temporary solution…

As Bloomberg reports, today's surge in Treasury repo rates poses a threat to the market more broadly because traders won't take new positions without confidence in their ability to obtain funding at consistent rates, said John Fath, managing partner at BTG Pactual Asset Management and a primary dealer trader from 1993 to 2008.

"Today was a bit of a watershed event, though we've been seeing this brewing. When they set funds rate target at 2 to 2.25, ideally you would like to funding to be around 2.15. For weeks it's been above that.
"Today was more dramatic. Funding opened at 4.5, quickly moved to a high of 10, then dropped back to 2.50, nothing close to 2.15. So you've lost control of where you want financing.

"Overnight financing is the key to driving the economy, leverage. If you don't have control over it, what's the point of setting a funds rate? If they ease tomorrow and funding is at 4%, does it matter if they eased?

"If the plumbing doesn't work, then it's going to dramatically affect secondary trading of Treasuries. Which is the last thing they need when there's massive issuance going on.

"This is without a doubt one of the worst things that can happen. In many respects it overshadows the Fed moving tomorrow, because if the plumbing doesn't work everything starts to break down. Everything is predicated upon your getting a reasonable funding rate. Otherwise why would you buy this paper to begin with. If you're funding your overnight position at 6 why would you buy a 10-year at 2?

"Today's funding market was more emblematic of what goes on in emerging markets rather than the largest developed debt market in the world. The bid-offer spread in repo should be a couple of basis points. At 7am it was 100bp. It was moving in increments of 50bp up and down. Dealers weren't quoting pricing in terms of size. That alone is suggestive of a market that's broken in the short term. The Fed would've been proactive by intervening at that point. By intervening at 10, it's too late. Most people need funding by 8:30. They didn't even get to the targeted amount, because it was just too late. The damage was done. If you're a foreign investor seeing rates all over the map it doesn't reinforce your viewpoint that things are working well.

"A number of people have called asking what it's going to look like tomorrow. These shouldn't be issues for the marketplace. Why would you initiate putting on new positions, trading in secondary market, if you were concerned about how consistent funding's going to be going forward. It's just a settlement date -- what's year-end going to be like? These are questions people have asked me, in panicked way.

"It's a bigger deal than a rate cut by far. It's meaningless if you put in a rate cut and overnight financing reflects nothing of that rate cut. Which is what's happening right now. I'm surprised they let this get out of hand."

How many more fleshwounds is this market going to withstand in the vain hope that Powell will keep delivering?