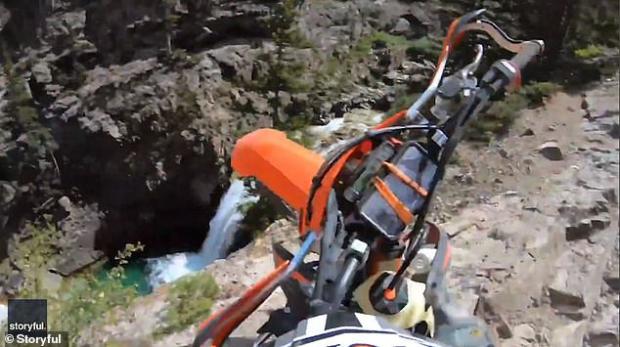 A lucky dirt bike rider somehow avoided death after he dropped 70ft down a cliff only to plunge into a lake, breaking his fall and leaving him unscathed.

Rider Rick Hogge can be heard shouting s*** as the bike loses its treading on the very narrow Schofield Pass, near Crested Butte, Colorado, U.S, and plummets down ahead of him.

In a matter of seconds Mr Hogge is falling down towards a potentially fatal or at least painful landing in the 'devil's punch bowl' lake.

Mr Hogge, who has 20 years biking experience, is heard saying 'Oh my god' he plunges under the water.

From his helmet cam we can see him bobbing around in the water for several minutes as he swims to the edge to climb out.

The incident took place on September 4, with Rick pulling himself out of the lake uninjured.

A group of friends had traveled from Texas with Mr Hogge for the annual trip in Colorado when the accident occurred.