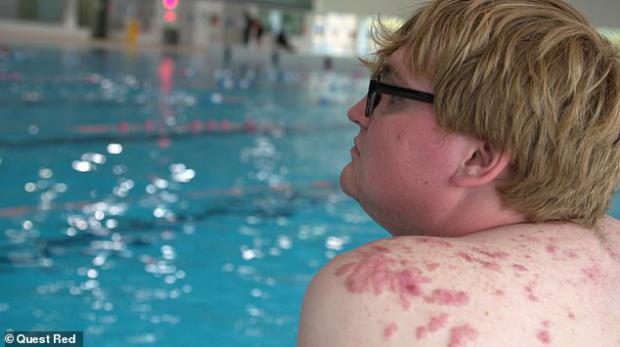 A young man whose severe acne and scars are like 'something out of a horror film' has them injected, lasered and squeezed on The Bad Skin Clinic.

In tonight's episode of the Quest Red show, Mitchell, 26, from the UK, who enjoys living an active lifestyle, tells how for the past six years, his life has been held by back a large spread of scarring on his shoulders and back.

Mitchell, who also suffers from autism, is at the end of his tether and wants the lumps removed - and even thought about cutting them off with a knife.

'I've had the condition roughly for five to six years,' he explains. 'I've tried everything I can, it's just got the point where I want them gone now.'

The lumps on Mitchell's back are red, raised and extremely tender, and Mitchell admits that he struggles with pain and the sight of them.

'The amount of bumps on my shoulders, I'd say there are about 20-25,' he says. 'They're very big, very grotesque, very red and swollen.'