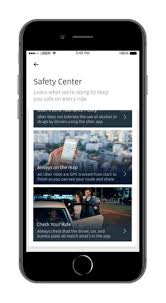 Uber will now be keeping tabs on all US rides. The ride-hailing company on Tuesday announced a new feature it's rolling out across the country that aims to detect when something goes awry during a trip.

Called RideCheck, the feature will send a push notification to drivers and riders if there's an unexpected long stop or possible crash. Drivers and riders then can respond whether or not they need help.

"We provide them, at their fingertips, a bunch of options to get help," Sachin Kansal, Uber's head of safety products, said in a phone interview. "Our goal really is to detect certain situations as they happen."

Uber provides millions of rides per day, but a small handful of those rides have reportedly ended in dangerous situations. Hundreds of passengers and drivers have come forward over the past few years alleging rape, kidnapping, forcible groping and assault during rides. Several lawsuits have been brought against the company by people claiming to have been sexually assaulted by drivers and several states, including California, Colorado, Massachusetts and Texas, have launched investigations into Uber on the issue.

Over the past three years, Uber has introduced several new safety features to its app. These include an emergency 911 button, anonymizing rider pickup and drop-off locations and a way to make it easier for riders to share their trip information with friends and family.