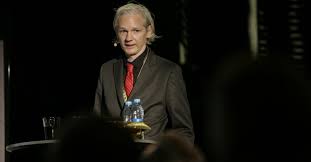 For over 150 days this has been Julian Assange's residence, whether he likes it or not. And a judge has ruled today, he is to remain there even after his jail sentence is over.

Swiftly after his asylum status was stripped by the Ecuadorian government, the British authorities sentenced Assange to fifty weeks in prison, for violating his bail. The maximum sentence being fifty-two weeks and the typical sentence being none and a fine.

With his arrest, Assange was moved to HMP Belmarsh, a maximum-security prison in South London. Belmarsh during the early millennium was known as 'Britain's Guantanamo Bay' for its foreign detainees, held without trial.

When you visit the prison, you are immediately struck by its fortress-like exterior. With its water-stained concrete perimeter walls, enumerable CCTV cameras and floodlights.

In two exclusive interviews with the European Centre for Press and Media Freedom (ECPMF), Julian Assange's most notable visitors paint a harrowing picture of his current condition.

Professor Nils Melzer is the United Nation's Special Rapporteur on Torture. Every day, he receives around fifteen requests, to investigate individual cases of alleged torture.

"But I can only deal with maybe one or two", Melzer tells the European Centre for Press and Media Freedom (ECPMF). But when in March, Assange's lawyers reached out to his office for a second time, providing credible evidence for the claim of ill-treatment, Melzer thought "I owe it to my professional standards to at least look into this."

A visibly fatigued and emaciated Assange greeted Melzer and his team during their visit on 9. May. It had been 28 days since Assange's arrest. He was wearing a plain blue jumper and grey joggers.

Melzer and his team's visit lasted for four hours. For three of those four hours Melzer and two medical experts, Professor Duarte Nuno Vieira from Portugal and Dr. Pau Perez-Sales from Spain conducted a medical assessment of Assange.

It followed the 'Istanbul Protocol'. The protocol's full name is the 'Manual on Effective Investigation and Documentation of Torture and Other Cruel, Inhuman or Degrading Treatment or Punishment.'

Melzer tells the ECPMF that at first, "after what this man [Assange] had gone through, I didn't know what to expect."

"From a medical perspective, both doctors concluded that his state of health was critical, and that it might deteriorate rapidly if he is not stabilized. And that's exactly what happened."

Exposing War Crimes Should Always Be Legal... Committing And Hiding Them Should Not

If You're Surprised By Tik Tok, You DON'T Want To Hear About This!

Daniel Ellsberg Testifies in Defense of Julian Assange and WikiLeaks

This Is Outrageous How People Are Allowing This To Happen!