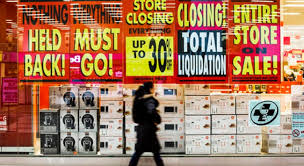 BDO warned that the recent acceleration of the retail apocalypse was primarily due to last year's weak holiday shopping season.

The rate of bankruptcy filings and store closures this year have jumped to crisis levels, expected to continue into 2020.

David Berliner, who leads business restructuring at BDO, said the trend is rather alarming but could slow into late 2019. "I don't think the pace of the bankruptcy filings will be as large as it was in the first half," he added.

BDO found many retailers are dealing with massive debt loads, over expansion due to cheap money, private equity-ownership pressures, and changing consumer behavior. It was the weak consumer in the 2018 shopping season that led to the acceleration of store closures in 2019.

Retail sales in 1H19 were lackluster, due to smaller tax refunds for consumers, trade war uncertainties and tariffs, and inclement weather, which forced many retailers to offer significant discounts, according to BDO.