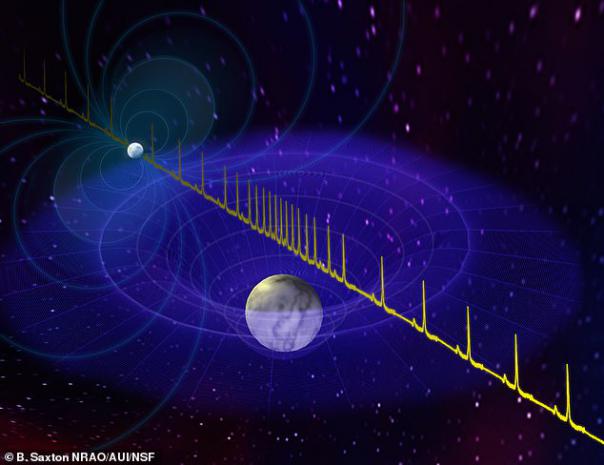 The most massive neutron star in the universe has been discovered by astronomers.

Weighing more than twice as much as the sun, and more than 70,000 times that of the Earth, it is also extremely dense.

The matter which makes up the star is so tightly packed that the entire star is a mere 18 miles.

It is known as a neutron star, the compressed remnants of a once supermassive star which exploded in a supernova.

The very biggest stars then implode and form black holes, but a neutron star is the end result of slightly smaller celestial explosions.

Scientists that discovered it claim it approaches the limits of how huge and compact a single object can become - without crushing itself down into a black hole.

The protons and electrons merge into each other to form neutrons. A single sugar-cube would weigh 100 million tons - the same as the entire human population.

It's 'the most massive neutron star ever detected - almost too massive to exist', say the US team.

Named J0740+6620, it is about 4,600 light-years from Earth and is also a is a pulsar which emits beams of radio waves like a lighthouse as it spins.