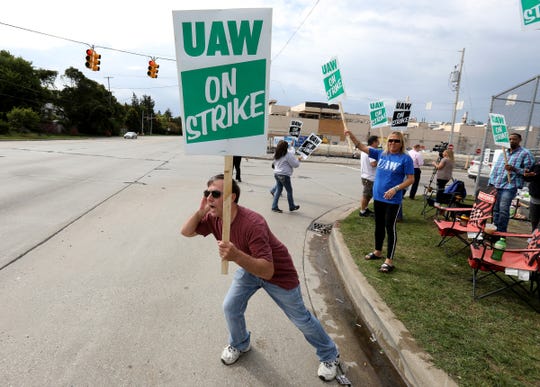 The autoworkers, cheered by a large crowd of labor supporters, turned toward the UAW Local 598 union hall down the street to pick up picket signs. They lined street that snakes around the plant that builds the popular Chevrolet Silverado and GMC Sierra pickups.

Horns honked as union members from throughout the region arrived in Flint, the birthplace of GM and a key spot in UAW history. In fact, cars blocked Van Slyke completely as the now-striking workers left the plant.

Dominique Birdsong of Flint said she left the chassis assembly line to strike with pride.

"We need to stand strong," she said, holding a picket sign outside a factory entrance as the strike took effect at midnight Sunday.

The strike comes against the backdrop of a federal corruption investigation that has implicated union President Gary Jones and his predecessor, Dennis Williams.

The action does not include Ford and Fiat Chrysler Automobiles, whose UAW contracts were extended while the union tries to negotiate a deal with GM that would be template for talks with the other two companies. The union let the GM contract expire at midnight Saturday, but told autoworkers with Sunday shifts to report.