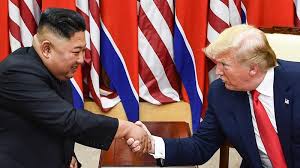 Kim asked for a fourth meeting with Trump in a letter in late August, sources said

The pair have met thrice since June 2018, including two formal summits

Kim, in the letter sent in late August, extended an invitation for Trump to visit the North Korean capital, the Joongang Ilbo newspaper reported, citing an unidentified diplomats.

Earlier last month, Trump said he had received a 'very beautiful letter' from Kim, but U.S. officials have not said anything about a second letter in August.