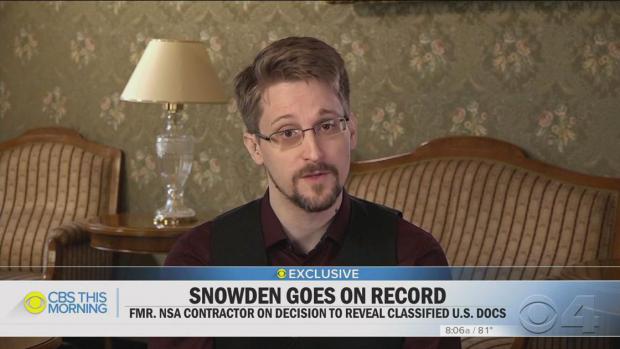 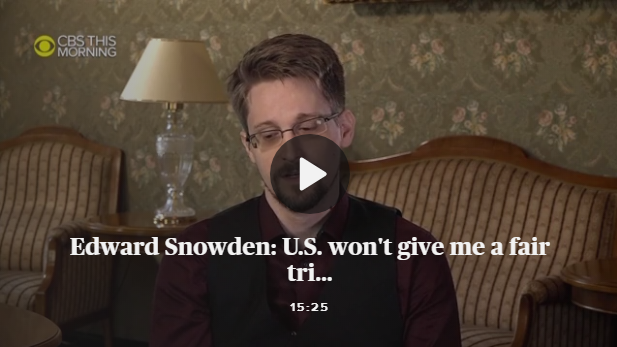 In an exclusive U.S. TV interview, Edward Snowden says he would like to return home but that the U.S. won't agree to a fair trial.

"I would like to return to the United States. That is the ultimate goal. But if I'm gonna spend the rest of my life in prison, the one bottom line demand that we have to agree to is that at least I get a fair trial. And that is the one thing the government has refused to guarantee because they won't provide access to what's called a public interest defense," Snowden told "CBS This Morning."

The former NSA contractor is shedding new light on his decision to reveal classified documents about the U.S. government's mass surveillance program back in 2013. Snowden disclosed government programs that collected Americans' emails, phone calls and internet activity in the name of national security and was subsequently charged under the Espionage Act for doing so. A congressional report said his disclosures "caused tremendous damage to national security."

In his new memoir, "Permanent Record," Snowden tells his story in detail for the first time and speaks about his life in exile in Russia. Snowden, who now identifies himself as a privacy advocate, said his biggest issue with standing trial in the U.S. is that the government won't allow the jury to consider his motivations.

"Again, I'm not asking for a parade. I'm not asking for a pardon. I'm not asking for a pass. What I'm asking for is a fair trial. And this is the bottom line that any American should require. We don't want people thrown in prison without the jury being able to decide that what they did was right or wrong. The government wants to have a different kind of trial. They want to use special procedures they want to be able to close the courtroom, they want the public not to be able to go, know what's going on. And, essentially, the most important fact to the government and this is the thing we have a point of contention on, is that they do not want the jury to be able to consider the motivations. Why I did what I did. Was it better for the United States? Did it benefit us or did it cause harm? They don't want the jury to consider that at all. They want the jury strictly to consider whether these actions were lawful or unlawful, not whether they were right or wrong. And I'm sorry, but that defeats the purpose of a jury trial," Snowden said.

When pressed on whether he considers what he did unlawful, Snowden refused to take a position but said "it's not hard to make the argument that I broke the law." He went on to say that the government continues to allege that his disclosures caused harm but, according to Snowden, has yet to show evidence of that harm.