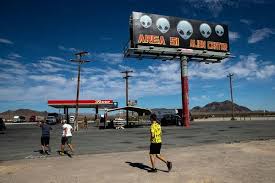 The aliens, if they're watching, probably have some questions for humanity. You might, too, so here's a closer look at what's happening.

There's not much to it: In late June, Matty Roberts, a college student, created an event on Facebook called "Storm Area 51, They Can't Stop All of Us."

The event, scheduled for Sept. 20, was meant as a joke about making a run on the mysterious and well-protected military test site in southern Nevada, fabled to be dedicated to the research of real, honest-to-goodness alien spacecraft.

Within three weeks, more than a million people marked themselves down as planning to attend. (By mid-September, the number had reached 2.1 million.) Even the Air Force noticed and, in July, a spokeswoman told The New York Times that "any attempt to illegally access military installations or military training areas is dangerous."

Concerned that some might take the call to action seriously and be arrested or hurt, Mr. Roberts decided to plan a sizable "Alienstock" music festival nearby as an alternative, according to reports, teaming up with Brock Daily, a co-host of the Facebook event, and Connie West, of the Little A'Le'Inn, in rural Rachel, Nev., which is home to fewer than 100 residents.

Mr. Roberts and Mr. Daily parted ways this week with Ms. West, according to Frank DiMaggio, an event planner who is now working with the two men. Ms. West has said that the party in Rachel is still on, according to The Las Vegas Review-Journal. But according to a statement, the three men say that it's poised to be "FYREFEST 2.0," a rerun of a famously hyped party in 2017 that failed spectacularly.

Instead, they are directing their followers on Facebook and elsewhere to an event on Sept. 19, hosted by the Downtown Las Vegas Events Center and sponsored by Bud Light, which will sell limited-edition alien-themed beer at the event as well as elsewhere in Nevada, Arizona and California. About 8,000 people are expected to attend, according to a spokeswoman for the center, which can hold up to 12,000.

Election WAR GAMES: "A New America Waits in the Wings" After Pre-Planned Chaos

Antifa is real. It's violent. And you need to plan for it.