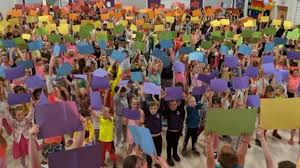 The video for schoolchildren aged 9-12 is part of nine new BBC Teach films produced as support material for the personal, social, and health education (PSHE) curriculum in UK schools.

Telegraph columnist Celia Walden has written a scathing review of the program, which she calls "noxious nonsense" that poisons children's minds, a product of the modern "Emperor's New Clothes gender diversity narrative."

BBC is indulging in the "propagation of misinformation," Ms. Walden writes, thereby betraying its journalistic duty "to deal not in fads, but facts."

By "willfully warping their minds," she continues, BBC is contributing to making the new generation of children "as self-obsessed as the supposed grown-ups."

If you want to tell it like the schools are doing, go all the way. All the way? Yes! Tell them that each and every person is his/her own gender. Like, 7.4 billion genders in the world.