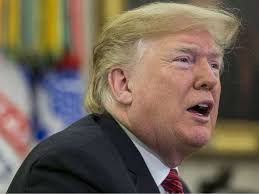 The White House has been talking to a trio of lawmakers: Democrats Chris Murphy and Joe Manchin and Republican Pat Toomey. They all support tougher background checks.

But Mr. Trump never defined what meaningful means and quickly backed off after talking to the National Rifle Association.

Since then, Mr. Trump has called mass shootings a mental health issue and criticized what he sees as overzealous Democrats.

"Democrats want to confiscate guns from law-abiding Americans, so they are totally defenseless when somebody walks into their house with a gun," Mr. Trump said.

1 Comments in Response to Trump expected to announce gun control legislation this week...

Do you want to be protected from shooters? Get guns and protect yourself from them. And protect yourself from government shooters, as well. --- Preamble to the Constitution: "We the people of the United States, in order to form a more perfect union, establish justice, insure domestic tranquility, provide for the common defense, promote the general welfare, and secure the blessings of liberty to ourselves and our posterity, do ordain and establish this Constitution for the United States of America." --- You might think that taking away my property (guns) is providing for the common defense, but here's how you can for sure tell if it is or not. Since you are against guns, get rid of yours, first. Then come and try to take mine.