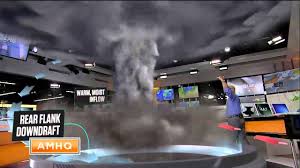 It was an otherwise ordinary day. Meteorologist Jim Cantore was giving the weather report inside the Weather Channel studios. That was before the tornado hit. Suddenly, an electrical line dropped mere inches from Cantore's feet. A car fell from the sky above him. As the studio lost power and he fled to the stairwell, the tornado struck with force, ripping the walls and roof off the building. The only thing left standing was a solitary American flag waving in the wreckage. No one was hurt, of course, because the scene never actually happened. It was generated as part of the Weather Channel's new Immersive Mixed Reality broadcasting project.

While it only lasted for seven minutes, the segment was actually six years in the making. The project—which won a 2019 Innovation by Design award for best North American design—is part of an ongoing effort by the Weather Channel's design team to reinvent its presentation.

Despite everything in the world that has changed since the midcentury, weather broadcasts have been largely the same since 1954, when British weatherman George Cowling gave the first weather forecast in front of a map. Of course, graphics and technology have evolved immensely since then, and those advances have changed how we get the weather: The map became digital, animated, and filled with real-time Doppler radar readouts. But the Weather Channel hadn't fundamentally bucked the information design of early broadcast trends until a few years ago.