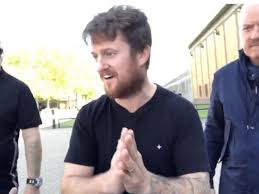 Far-right activist Tommy Robinson has been released from prison two months after he was jailed for contempt of court.

Robinson, whose real name is Stephen Yaxley-Lennon, emerged from the Belmarsh maximum security facility with a beard and bushy hair.

He said: "I know I look a mess ... first stop hairdressers."

Robinson added: "I look like a little cowardly convert ... Salaam-Alaikum," using the Arabic for "peace be unto you".

The anti-Islamic agitator was jailed over a video he live-streamed on Facebook featuring defendants in a criminal trial – in breach of a court reporting ban,.

Robinson again claimed he should not have gone to prison in a video interview with far-right YouTube channel Rebel Media outside the prison on Friday morning.

During his stint at Belmarsh, he was visited by supporters such as far-right provocateur Katie Hopkins and Brexit Party founder Catherine Blaiklock, forced to resign from the party over anti-Islam comments.

While in jail the operators of his official Telegram channel "Tommy Robinson News" endorsed Boris Johnson and called for all supporters to "back Boris".