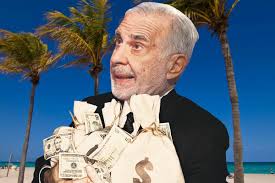 The 83-year-old, who was born in the Far Rockaway neighborhood of Queens, has been a major figure on Wall Street for decades, and back in the 1990s, he bought a mansion on the Indian Creek island enclave in Biscayne Bay in Miami. Icahn expects all of his employees to make the move with him: Those who don't "won't have a job", according to several sources from within his firm.

According to the New York Post, any employees who aren't ready to leave their offices in New York City and White Plains on March 31, 2020 and start work in the Magic City on the next day will be let go without severance. To "sweeten" the deal, Icahn promised that everyone who makes the move will earn at least as much in salary and bonus next year as they did in 2018, and that anybody who is fired before March 31, 2023 would get an "immediate payment" equal to that amount. He also offered employees a $50,000 "relocation benefit" that will be "payable in April 2020 once you have established your permanent residence in Florida," according to internal memos seen by the New York Post.

For those who don't make the move: "The company will not contest your unemployment claim."

"The current maximum weekly Unemployment benefit rate is $450, which you can receive for a total of 26 weeks," the letter went on to note.

More than half of the company's employees accepted their bosses offer by the July 1 deadline.