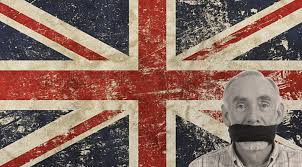 -- not the actual physical expression of hatred shown in the mass murders of innocent people by terrorists. Terrorist attacks, it would appear, are now supposedly normal, unavoidable incidents that have become part and parcel of UK life.

Unlike proscribed groups that are banned for criminal actions such as violence or terrorism, the designation of "hate group" would mainly be prosecuting thought-crimes.

Democratic values, however, appear to be the think-tank's least concern. The proposed law would make the British government the arbiter of accepted speech, especially political speech. Such an extraordinary and radically authoritarian move would render freedom of speech an illusion in the UK.

The Home Office would be able to accuse any group it found politically inconvenient of "spreading intolerance" or "aligning with extremist ideologies" -- and designate it a "hate group".

The Tony Blair Institute for Global Change has released a report, Designating Hate: New Policy Responses to Stop Hate Crime, which recommends radical initiatives to tackle "hate" groups, even if they have not committed any kind of violent activity.