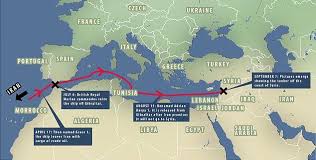 When asked about the Iranian tanker's recent delivery of oil to Syria, spokesperson Morgan Ortagus said, "I think the importance here to our friends around the world in the international community is to note that once again you have been lied to and misled by the Iranian regime."

Ortagus said Tehran blatantly lied to UK/Gibraltar authorities about its intent to offload its 2.1 million barrels of Iranian oil.

"The Iranian regime broke its word and appears intent on fueling the Assad regime's brutality against the Syrian people, who continue to face widespread violence, death and destruction," Ortagus stated. "This fits into the web of lies perpetrated by the Iranian regime for 40 years," she said.

"Their deception and broken promises are not just aimed at the international community but the Iranian people, too," she added. It's believed the Adrian Darya conducted a ship-to-ship transfer while waiting off Syria's coast, near the port of Tartus.

Nobody knows more about webs of lies more than those who work in the U.S. government.