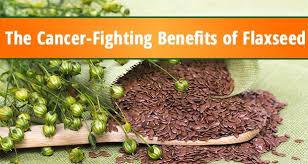 Now, researchers are looking back to nature to make up for chemotherapy's shortcomings. In a new study, Italian researchers looked at whether flaxseed could enhance the effects of the chemotherapy drug doxorubicin in treating breast cancer.

Despite being considered an essential medicine for cancer by the World Health Organization, doxorubicin is known for carrying highly toxic side effects. Therefore, the researchers sought to find something that could be combined with the drug to reduce the amount of it that patients need to take.

They focused on flax because past studies have shown that phenolic flaxseed oil extract has several chemotherapeutic effects. Their results were very positive, finding that the mixture is able to induce cytotoxicity and cell death, among other benefits. Their findings were published in the International Journal of Oncology.

Why is flaxseed so beneficial?

Flaxseed contains two cancer-fighting components, lignans and the omega 3 fatty acid known as ALA. Lignans, which can also be found in sesame seeds, are plant-based estrogens that can fit into the estrogen receptors in breast and endometrial tissue cells. This can protect cells from becoming damaged or cancerous.

Lignans have been shown to decrease breast cancer mortality by as much as 70 percent and all-cause mortality by up to 53 percent. Taking 50 milligrams of lignans per day in the form of 25 grams of flaxseed was shown to reduce tumor growth in people with breast cancer in just 32 days.

Meanwhile, other studies have shown an association between flaxseed and lignan intake/serum levels and a lower risk of breast cancer, especially in women who are postmenopausal.

The statistics are promising

How do they accomplish this? First, the lignans in flaxseeds block the blood supplies tumors depend on to live. They also lower estrogen production, block estrogen receptors, and help the body generate more protective estrogens.