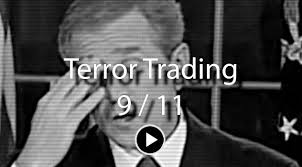 There can be no dispute that speculative trade in put options – where a party bets that a stock will drop abruptly in value – spiked in the days around September 11, 2001 – even if the US Securities and Exchange Commission and the 9/11 Commission will not say so. More than a few people must have had advance warning of the terror attacks, and they cashed in to the tune of millions of dollars.

Is there any truth in the allegations that informed circles made substantial profits in the financial markets in connection to the terror attacks of September 11, 2001, on the United States?

Arguably, the best place to start is by examining put options, which occurred around Tuesday, September 11, 2001, to an abnormal extent, and at the beginning via software that played a key role: the Prosecutor's Management Information System, abbreviated as PROMIS. [i]

PROMIS is a software program that seems to be fitted with almost „magical" abilities. Furthermore, it is the subject of a decades-long dispute between its inventor, Bill Hamilton, and various people/institutions associated with intelligence agencies, military and security consultancy firms. [1]